March 1st saw Venus reveal her cards as she simultaneously ingressed Aquarius & squared its ruler Uranus, planet of disruptive progression & awareness. What elevates this beyond a relatively minor & frequent planetary transit suggesting some minor restlessness, excitement or “need space” in relationships or finances, is that it sees the two planets in Mutual Reception just days before the much-anticipated full ingress of Uranus into Venus ruled Taurus on March 6th until April 2026.

The mutual reception will only last until 26th March but whilst Uranus remains in Taurus will repeat each year or so whenever Venus visits Aquarius (for a list of dates see below). These dates could be key stepping stones or windows of advancement correlating with times of frustration, disruption or unrest, perhaps when the pieces begin to fit together & a feisty, rebellious Venus finds it easier to relate Uranus’ cause, excited at possibilities for social & financial reform. On a personal level this could simply be when it’s easier to be yourself & reject convention in relationships or financially, but whether personal or social this will be an interesting dance to observe, Venus & Uranus fuelled by desire for excitement & change.

So, events around March 1st may well be small but significant portents to the bigger picture of Uranus’ 7yr journey through Taurus, Venus’ stronghold.

The coinciding New Moon, full of fertile emerging potential also has more to add to the story, reflecting the early stages of the Venus Uranus frisson. Although the planets themselves are lightly aspected, their presence is strengthened via their angular signs (Taurus MC & Aquarius DC).

Rising Leo describes pride & a sense of self,reflected by the conjoined Luminaries also confident, full of fresh daring vision & innovation by picking up the waxing Jupiter Uranus trine. Importantly Uranus is on the critical 00 of Taurus’ ripe, fertile ground emphasizing further the newness this Moon promises. Leo/Aquarius is “I vs Us” but the Neptune conjunction suggests a sense of humility – this is not a selfish, egotistical New Moon but about future communal opportunity & potential, pride inspired by a sense of love & compassion believing everyone can shine, especially anyone who has been a victim, underdog or undermined.

Neptune sings “I believe” & as the focal point to an opportunity laden Mini Grand Trine with Mars in Taurus & Saturn Pluto in Capricorn pointedly states “I believe I can make it happen.”  With both Earth influences this will be about doing it properly, realistically & making it last.

Much has already been written about the Uranus Taurus ingress, themes of radical change in monetary, agricultural systems & societal values. Also, female empowerment continues to be very much in focus & viewing this New Moon as a gestating ground for Uranus’ ingress, is fuelled by motivational Mars conjoining the Taurus Midheaven at the chart zenith – fertile strength fortified by flowing aspect to the might of the steadily impending 2020 Saturn Pluto Capricorn conjunction. But of course this is not just about female empowerment – this lunation picking up the Saturn Neptune sextile so is about empowering any humanitarian cause.

The wonderful fresh lunar potential is also gifted with Chiron at the Aries point 00, bursting with powerful & critical initiative, perhaps through people taking it into their own hands to find new ways of attaining personal wholeness – Uranus seeks emancipation so this could be also be about liberating us from anything in which we wound ourselves, but also inventing new ways of helping ourselves.

According to Don McBroom[1] “..the Aries Point suggests the potential for public projection to the external world -related to the specific planet or point in contact..” but relevant issues & ideas around how to intiate change may take a little longer to surface – Mercury follows a short step behind on the anaretic 290 so is a little unsure how to voice Chiron’s experiences  – does it shout out (Aries) or suffer in silence (Pisces)? Its retrograde (Mar 5th – 28th) offers a chance to rewind, reflect & perhaps comes to some form of realization. I wouldn’t be surprised if during this retrograde more victims of injustice, inequality or abuse are gathering the strength to publicly voice their experiences & pain before demanding justice & change. But importantly, it is also how suffering is portrayed….

….at the time of writing Comic Relief is under-fire for its use of celebrities to promote its charitable cause. As a result, this established charity (Neptune) will likely be in for a shake up of how it relates (Venus) its cause (Uranus).  Liz Warner, CEO of Comic Relief has already said “You’ll see the films we put into Sports Relief are a step towards … change. People talking in the first person in their own voices, with local heroes and local heroines talking to us about the work they’re doing. You won’t see a celebrity standing in front of people talking about them.”[2]

It will be interesting to observe the media when Mercury goes direct again – interestingly its Retrograde takes it back over Neptune before it stations direct on 160 – so Mercury is bound to echo the message of this full Moon.

Equality, humanism & societal change are all ongoing topical themes & this New Moon describes the exciting potential ready to be unleashed as expanding individual & social creative freedom reaches new heights. The mutual Venus Uranus progressive cause promoted by new, autonomous ways to voice what needs changing such as stereotypes & stale institutions will bring a shake up in supercharged ground ripe for reform. Watch this space both globally & personally…..

Wednesday 31st Jan sees Mercury move in to Aquarius which impels trapped thoughts & ideas to break free. Progressive, experimental even shocking concepts could spurt forth as well as flashes of insight – keep a notebook handy as they may be gone as suddenly as they arrive. Also, watch out for speaking before you’ve even managed to process the thoughts!!

Some of us may already be feeling the effects of this with the Lunar Eclipse at 110 Leo the same day bringing communications or ideas to a head.

Mercury is simply the impartial messenger of this Leo/Aquarius Eclipse & it will be interesting to see what news is unveiled around the 7th February when Mercury crosses the eclipse point (along with Venus sextile Uranus providing opportunities to break free of the mould precedented by Venus opposition North Node 29th January.)

We will see a continuation of the current MASS feminine revolt, but now even more focused on the “IF I SPEAK OUT FOR MYSELF, I SPEAK OUT FOR SOCIETY.” This message is reinforced when looking at the Moon (feminine) ruled Eclipse Chart with the communicative, educational, expansive & judicial axis highlighted, with the rest of the chart swinging around the Moon, in the spotlight…… 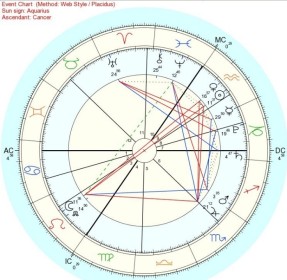 All paving the way for Uranus’s May 2018 ingress into Taurus ……which is to be covered in a more detailed post currently in progress, but coming soon…..